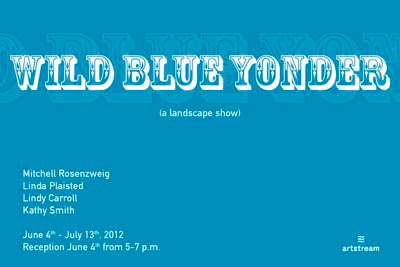 Yes folks, it's here. The Wild Blue Yonder show. Something a little out of the ordinary. Something a little landscape like. Something you won't want to miss. Join us Saturday June 4 from 5-7 for some extra special works by Mitchell Rosensweig, Linda Plaisted, Kathy Smith, and LIndy Carroll. It's going to be eyepopping!
Posted by Susan Schwake at 13:46 No comments:

Some new work from the students 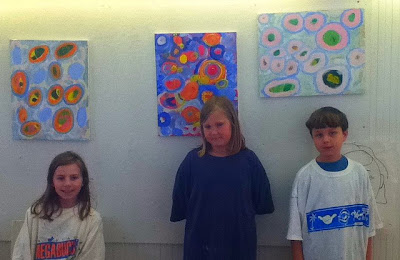 Our afterschool art classes at artstream have been working on some abstract paintings. Learning more about color and layers and beginning with a shape we are familiar with: circles.
These three are done - and there are some others to be finished next week for our annual (18th annual!) June student show. It's so exciting!
Posted by Susan Schwake at 11:58 1 comment: 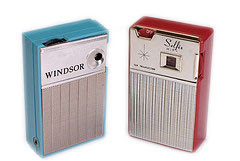 At our March Ekphrastic Art 3 gathering my partner in ekphrasis created this beautiful poem. We worked on coming up with a theme for our art and settled on rock and roll - which begat AM radio, transistors to be exact. My artwork was sold without (gasp) a photo, but was based on the above images. I share this with you in poetic form below because it just sums up summers on the banks of Lake Champlain in my bikini with my friends and a beach towel and my little grey leatherette cased transistor radio playing Big Yellow Taxi ....
Amplitude Modulation by John Michael Albert (my hero)
January 29, 2011
I don’t care when you were born, if you didn’t hit
the big one-three by the early sixties, you missed it.
You missed the invention—did you get that?—
the invention of the transistor radio.
You no longer had to wait for the house to empty, then wait
for the tubes in that handsome, veneered cabinet
in the living room to warm up, then sit so super-close
to the speaker only you could hear the beat.
You could sneak your handy, pocket-sized radio
to your bedroom, to the beach, to anywhere
your parents weren’t, and learn everything they
didn’t want you to know about the world—in short,
three-minute lessons. Did they ever tell you about
California girls, or where the Mersey River is,
or what was going on at The Rising Sun, or that
all songs should be about a girl or sung to a girl?
That little, red battery-pig gave your mind genuine
Amplitude Modulation the moment you turned it on.
Who else would tell you what a three-dog night is,
what places a surrealistic pillow would take you to
in the company of an ageless white rabbit?
From the time baby love had you dancing in the streets,
until you knew, first hand, the benefits of being
eight miles high with a girl named Lucy, the nerds
who invented the transistor were your best friends.
Next stop? The other switch on your transistor,
the wild thing that would move you from the safety
of your wider world, to the world of heavy metal,
ten-minute songs, and a new, more florid vocabulary,
in the intense, once forbidden kingdom of FM.
Posted by Susan Schwake at 07:50 1 comment:

Gardening in the rain 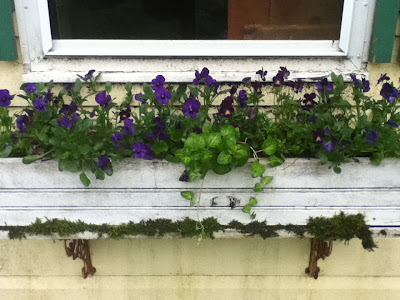 May has been exceptionally wet here in New England - we are lucky that Saturday had some dryness to it and that we could step into our yard without squishing our feet into a foot of mud. Rainer got the vegetables in and I worked on the flower beds a bit adding a few new perrinieals in and stocking the mossy old window boxes with found violas and a few new ones too. Rain again today and through the week. Sigh. If we get to NYC this weekend, I am hoping we will find the sunshine there! Some photos of now and years past in the garden. 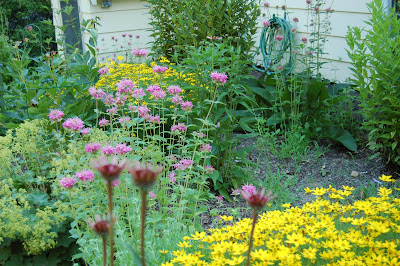 Posted by Susan Schwake at 07:13 No comments:

Our school year classes are coming to a close next month and our Summer classes will begin at the end of June. Here is a shot of our classroom in action. It is also the last day we saw the sun here in our corner of the world! (last Friday)
Hope it is sunny and wonderful where you are! 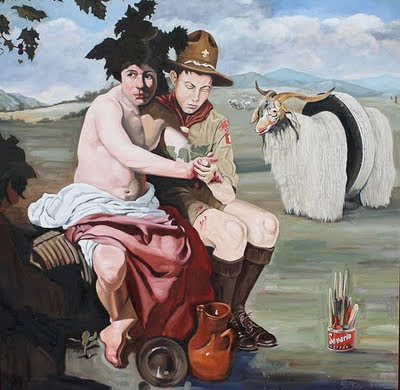 Why art education is important ... 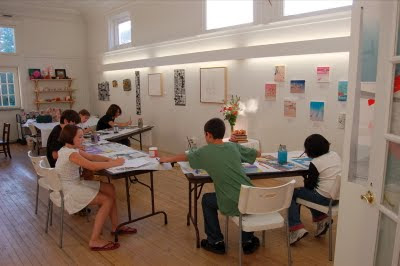 What can artists do? Artists can change the face of an area, inspire others for greatness, make us laugh and cry, infuse a city with economic riches, develop a new way of thinking, illustrate an era, illuminate a thought and spread the word of change.
Posted by Susan Schwake at 07:49 3 comments: 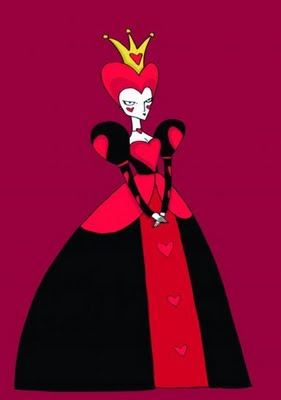 Part of the Comic Book Day exhibit - through May 31. We love Paul! All available here.
Posted by Susan Schwake at 08:05 1 comment: 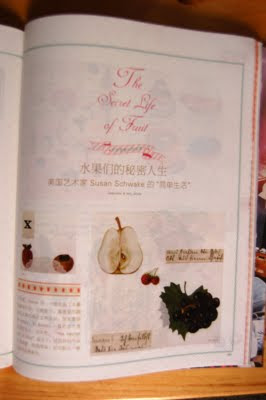 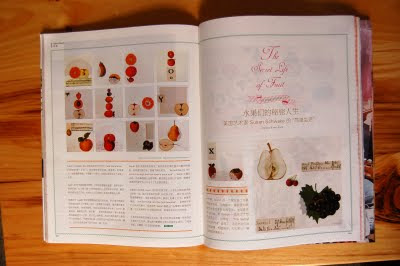 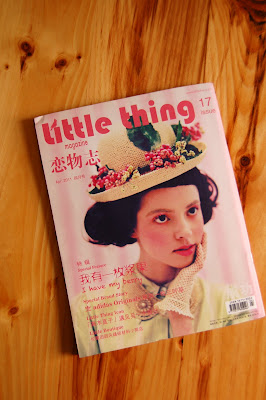 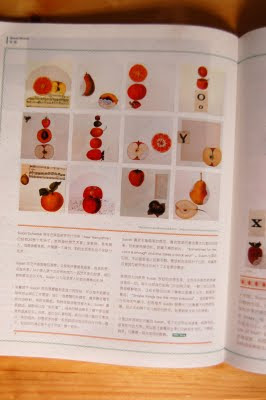 Whirlwind weekend here at chez Schwake. I hope your Mother's day was lovely as ours was!
It was so nice to open this beautiful magazine yesterday and find my "secret life of fruit" collages featured. Little Thing magazine is a lovely visual feast of color, fashion, home decor and even a few recipes. They contacted me a few months ago to interview me, and well, here it is! Thanks to Joyce for asking me to be included in their "fruits" issue!
Posted by Susan Schwake at 08:23 2 comments: 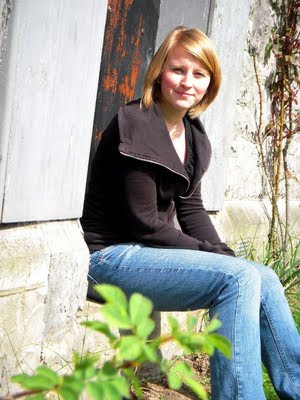 grace in france
Busy time here, so there I'll let the photos do the talking - Daughter Grace is graduating from college tomorrow. Yes, tomorrow! She will have earned herself a BA in English a BA in French and a minor in Creative writing. Yes we are proud of her. We have an opening during the day 10-4 tomorrow as well at artstream featuring the beautiful spring work of Emily Marie Cox called Spring is in the Air
! 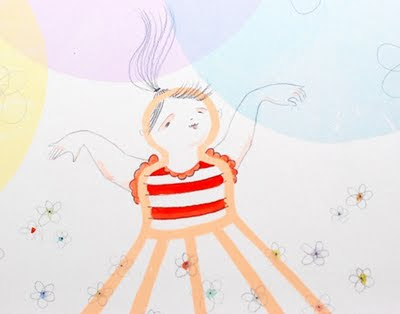 Along side that we are hosting a group of comic book/illustrative artsits for Free Comic Book Day, supported by Jet Pack Comics- a way cool store across the street from us filled with amazing artists and fun loving people.
My book: Art Lab for Kids is finished and getting it's final touches before sending it off to my lovely publisher. Can't tell you how wonderful that is! Happy happy times here! 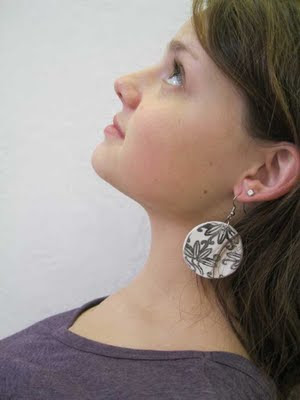 chloe with some of her fabulous porcelain earrings
Daughter Chloe has finished up her work for her AP art class and I had to show you one of her pieces here: the deer head which she made from plaster and paint is just incredible. 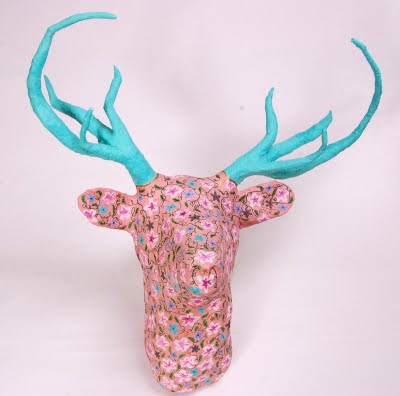 Among other things, I can't wait to have it up in our home somewhere! She's going to have a booth at the Strawberry Banke Sundays in Portsmouth this summer too - so look for her there!
Summer classes are starting to fill up at the studio too - so grab a spot now while you can still select something and get your art on! 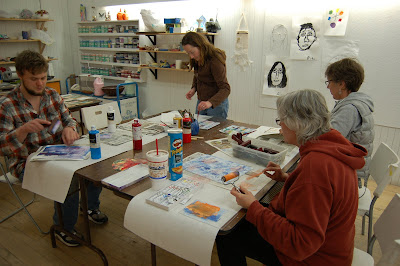 some of my mixed media class
See you next week!
Posted by Susan Schwake at 08:23 8 comments: 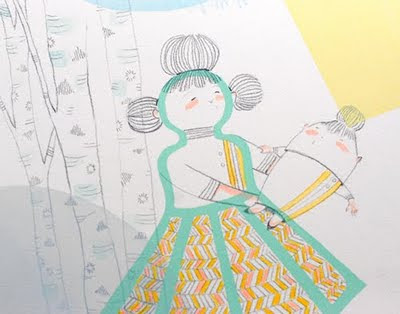 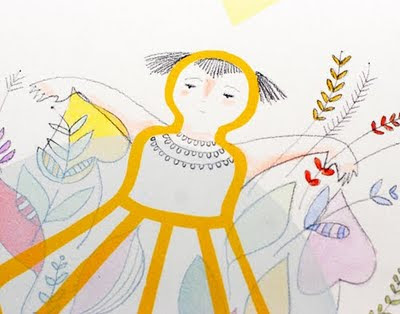 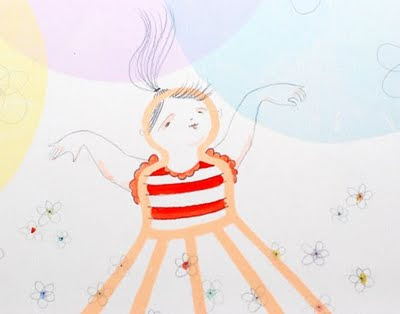 And after yesterday's post, the only fitting thing to follow is a few snippets of springy goodness from our upcoming show! All available in the shop today at 5!
Posted by Susan Schwake at 07:45 1 comment:

Meet Emily Marie Cox: Spring is in the Air 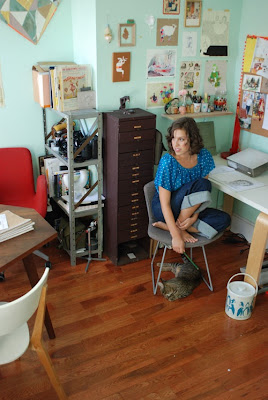 Emily in her studio

1. Where do you live and does that influence your work at all?

Right now I am on the cusp of some major life changes and am playing the part of a gypsy as I get ready for those events. I just moved from Brooklyn and am currently working out the details of my next move. For the last few months, I have split my time between my childhood home in Wisconsin, visiting my fiance in Austin and revisiting my recent past back in NYC. When I was living in New York, I was very inspired by all the diverse characters walking down the street or sitting on the subway. Now that I spend most ofmy time in a rural environment, I relish in the quiet, natural beauty around me. It has been a pleasure to watch spring arrive this year. 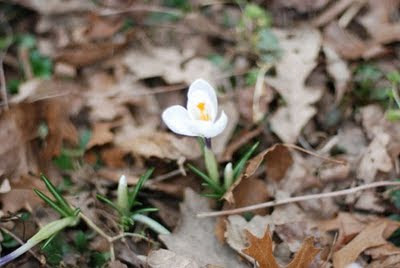 2. We had some of your work before in our Deep South show - these pieces are quite different, yet quite related - can you tell us about the journey to the new work?

At the time of Deep South, I had just graduated from college with a degree in Fibers. My work at that time was very sculptural. Living in a small space in New York, I wasn't able to do as much 3-D work and my work began to transition into 2-D, a much more apartment friendly way to work. My work has forever been very figurative and illustrative. It keeps chasing me! In the past couple years, I have stopped denying it and let the drawings take over me. 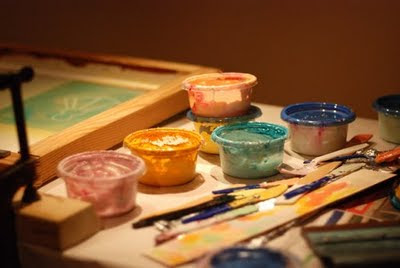 2.b Tell us about what Spring means to you.

You will have to come to the show to find out!

A day devoid of time.

4. Desert island scenerio: one art material to use, one dessert to eat , one band to listen to (over and over!) - which would they be?

5. Do you have a practice or ritual in making art?

I don't have a specific ritual but I make sure my mind is in a place it needs to be according to the kind of art I am creating. For this show, I created it at the end of winter so I could really feel what it was like to emerge into spring. I also listened to a lot of happy music and I wore the same outfit every time I went to work on it in the studio. 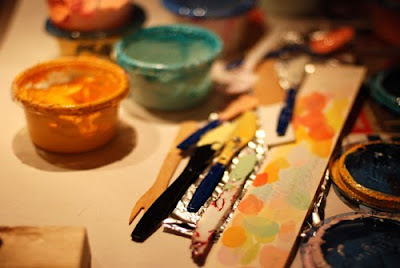 6. Have you stayed in touch with like thinking class mates from college - and have you collaborated?

The most valuable thing my education gave me was the people I met. We have all remained very close and often remind each other about how fortunate we are to have met such kindred spirits. I have collaborated with many of them. My most exciting collaboration is on the brink of unveiling. Stay tuned to pocketteloves.tumblr.com to learn more soon!

7. What is your one wish for your art?

I wish for my art to speak to many so I can forever continue to support myself with it.

Thank you so much Emily for this interview and a peek into your artful life!

The show opens Tuesday during regular gallery hours - but a formal opening will be held Saturday May 7th from 10 a.m. to 4 p.m. All work will be available online on Tuesday May 2nd at our shop.

Posted by Susan Schwake at 09:00 No comments: