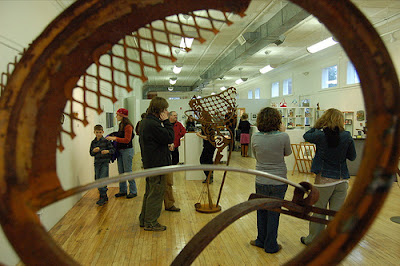 It was an icy cold afternoon, but we still pressed on with the opening for "Three Dimensions" yesterday afternoon as scheduled. A nice non "football" influenced crowd (pats apparently won a big game... er... ?) and the show went on! A few more shots over at flickr.

The word for the day is ... rise ... above the clatter, a loaf of bread and onwards and upwards!
Posted by Susan Schwake at 12:27

Email ThisBlogThis!Share to TwitterShare to FacebookShare to Pinterest
Labels: gallery

Your gallery space is lovely! How nice that you publish photos on flickr so we can all 'be' there.

Don't you love dislexic (sp?) moments when trying to type the verification word????

thanks stephanie! i was thinking it would be a great creative project to use those verification words for art... somehow... lol!

Congratulations on the new show, Susan! Wish I could have been there, too. Thank you for showing us the photos.

what a great photo! glad that some folks got out to see it...