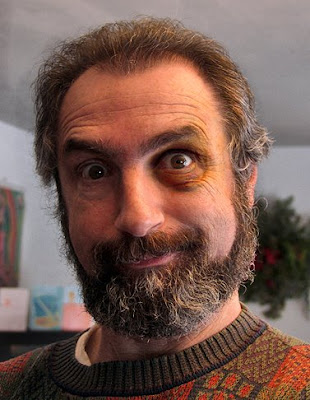 A quick little interview with our fair city's Poet Laureate: Andrew Periale. It's so nice to have one as prolific and as witty as the multi talented Andrew. Hope you enjoy this!

Earliest memories of your art?

I have been writing poetry, playing music and doing theatre since high school.

I was 8 or 9 years old when I started doing something I called “paper
surgery”–portraits collaged from a variety of magazine photos. My
mother found them quite disturbing, which is ironic considering she
later came to adore the work of Romare Bearden, and now works
primarily in collage. I like to think I was one of her early
influences.

What is the role of art in the world?

Art has so many roles in the world. One of my favorite is social
activism–speaking Truth to Power, or even just speaking Beauty to
Ugly.

Where do you do your art?

I create theatre wherever a company engages me–Boston, Philadelphia,
or in our Strafford studio where I work with my wife and partner,
Bonnie. I write poetry wherever I can wield a pen or plug in a
laptop–most frequently at cafes: Adelle’s (Dover), BNG (Durham and
Portsmouth).

Influences?
– My excellent high school drama teacher.
– Theater artist Philippe Genty (with whom I studied in France)
– Director Robert Smythe, with whom I’ve collaborated as playwright
on several projects
– Peter Schumann (Bread and Puppet Theatre), who has shown me what it
means to be principled and courageous in the work.

Marry someone who believes in your work, and who has money and health benefits.

a fine stinky cheese, with espresso and a shot of grappa

Favorite artists? So many. Among my current faves: Amanda Palmer
(writes and performs with The Dresden Dolls), Wislawa Szymborska
(Polish poet, Nobel laureate), and Bonnie Periale (a fabulous and
underappreciated painter, dancer, puppeteer).

and now a poem from Andrew:

Kill crazy, said his captain, still,
if he’s game for another hitch in ‘Nam,
make sure his will is up to date.
Thrill junky, trigger monkey,
he relished the drill–Van Gogh the dead,
string unhearing pearls on silken thread.
Man, he looks like a million bucks
necklaced like a grim Marc Anthony
who’s finally got the Romans’ ears.

A third tour was denied—gilding the lily,
his captain said. He ended at his parents’ home,
chilling in the La-Z-Boy until the beer ran out,
then would patrol the back porch, light a joint
and fire his submachine gun at the moon.