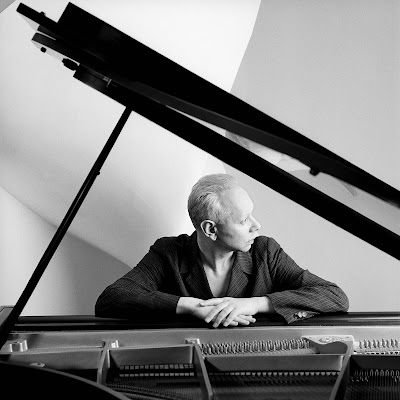 photo from press kit of Joe Jackson.com
Lists, life lists - do you have one? I am a list maker, sometimes only in the back of my head, othertimes on small scraps of paper, cards, or in my pocket folder if I think it's of upmost importance. My life list is one of those in my head. On this list are many things musical. One of those things was fulfilled last night - finally!
Last night my friend Ed and I went out to a concert at the Music Hall in Portsmouth to see Joe Jackson and hear some of his new music from the most fabulous recording called Rain. I have followed his music since college days, while working at the radio station and opening the package which held "Look Sharp!" inside. It was such a turning point in my musical enjoyment that I just can't tell you how exciting it was to finally see Joe Jackson live. I have just missed him over the past twenty years in London, Chicago, San Francisco, and in NYC. Imagine my surprise when I found out he was playing right here in New Hampshire. It was great to see him at the Music Hall as it was more intimate of a venue than the other locations. If you haven't heard his new album "Rain" you are just missing out. It shines like his diverse musical talent does with beautiful lyrics and fabulous riffs ranging from new wave to jazz and everything in between.
Posted by Susan Schwake at 12:28

oh god. me and lists. they are scattered everywhere... just like you, on bits and pieces of paper. in books. endless books. and always in and on my heart... yes, i write and hold lists there too.

and you went to go see joe jackson. oh god again. i haven't listened to him in years. suddenly you had me humming a song or two.

and i can imagine, that was just the kind of night that you needed...

just back from paris tonight. i have a story to tell... maybe i'll blog it later, or keep it for when we finally catch up on the phone together.

Oh my gosh, I'm so glad Joe Jackson is still around, and with a new album yet! It must've been so great to hear him in such an intimate setting instead of a huge venue. When my husband and I first got together we listened to his music constantly. Did he play my 2 fave songs?? Steppin Out and It's Different for Girls?? hmmmm, I think I'll listen to them now. Thanks Susan. :-)

he did play steppin out and different for girls and slow song and everything gives you cancer and you can't get what you want and one more time (my personal fav from the way back machine) and rain and invisible man and rush across the road (absolutely AMAZING) and a few intertwined medley things and amazing improv-ish jazz bits with little riffs from here and there.
it. was. amazing.
i don't think i have seen a concert where so much pure musical joy was released. joe jackson is a real gift.

Your excitement and enthusiasm positively brims over, Susan.

steppin' out was my senior prom theme song. i wonder how many other people on the planet can say that? my guess is about 345.

glad you injected some live music into your life.

Rain is a beautiful album. It immediately struck me as a sort of concept album--or soundtrack even.

Hi,
I’m Reneese and I’m working at a company interested in website and blog advertising. I have seen your site’s potential for advertising and I believe that our client’s business would be well suited for a link placement in your site. Our client’s business offers services for all types of printing jobs from business cards, postcards, greeting cards to large print projects for posters and vinyl banners. It would be of great help to your readers to be informed of such printing business.

Let me know if you are indeed interested. Please get back to me (reneese.mackey777@gmail.com) with your name and URL address so I can send you further details.
Looking forward to do business with you.