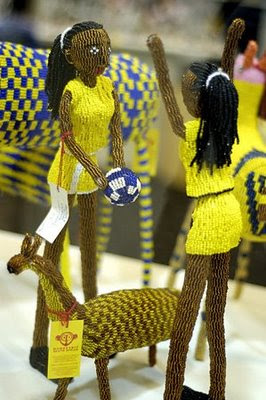 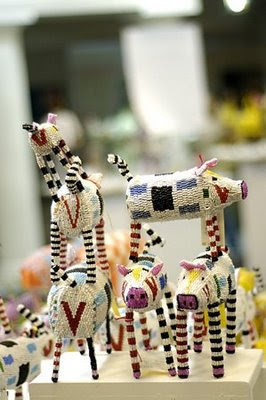 Yeseterday I was taking a peek at the Art Tea Life blog by dear heart, Sandy Gordon. There I found out about the most compassionate program I have heard of in ages. Art Aids Art and Monkey Biz.
It all started with the "one little person making a difference". Making a difference through art. The film "Bigger than Barbie"attracted me first - as we are partial to indie film here - and then the entire project captured my heart. So much infact that we are going to host a trunk show of the work here at artstream in the fall, (stay tuned for day and time), along with a showing of the film.
I hope that you can come. I hope that you will take a moment and look at the links to read more about this wonderful program. Here is an excerpt from the writings about the film:

When Tina Davis first saw the colourful and quirky Monkeybiz dolls in a friends’ house four years ago, she fell in love immediately. Back then she didn’t know anything about who made the dolls or where they came from. A few months later she came across the dolls in a shop. It was only then that she learned about the non-profit organisation, Monkeybiz and their amazing work combining arts and empowerment for women from the poorest townships in Cape Town, South Africa.

After her first visit to Cape Town in late 2002, she was convinced that the fascinating story of Monkeybiz and their invaluable work could be made into an uplifting and heartfelt documentary.

We follow the dolls on a fascinating journey from the township of Khayelitsha to the high-end stores of Donna Karan in New York. The film also takes you to Tromsø, “the land of the midnight sun” in the far north of Norway, where Monkeybiz had an exhibition in connection with the 46664 Arctic concert for HIV/AIDS in 2005. The strong and admirable women behind Monkeybiz are at the heart of Bigger than Barbie. The film also includes appearances from Desmond Tutu, Donna Karan, Annie Lennox and Nelson Mandela.
Posted by Susan Schwake at 09:25

I was so immediately taken with Sandy's post....I went right over and bought a tall dollie. I'm so glad you are hosting a sale! I wondered if they would travel far and wide to do set this up.

Can't wait to hear how it goes...maybe incorporate some 'virtual' blog aspect??

we will most definitely incorporate the virtual blog aspect!!!
it is an amazing project. can't wait to get started!

That is seriously groovy.